Islamic conference in France considers “whether wives should be beaten or not”. 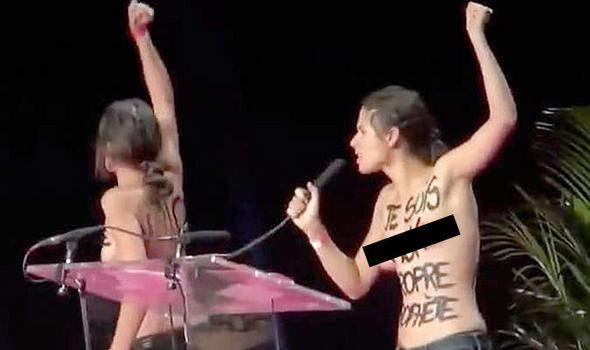 The two Femen feminist protest group members jumped up on the stage wearing just jeans as they bared their breasts with slogans written in black across their chests and stomachs. Aged 25 and 31, they both ripped off Arab-style cloaks, then took microphones off the stunned looking imams and shouted feminist mottos in French and Arabic before being rushed off the stage by about 15 men and police.

One woman had “No one subjugates me” on her body while the other had “I am my own prophet”. The whole ordeal on Saturday was captured on film and a man, who appears to be dressed in white like the Imams, is seen apparently kicking one of the women.

Inna Shevchenko, a Femen spokeswoman, said two extremist preachers at the conference in Pontoise, northwestern Paris, were discussing “whether wives should be beaten or not”.

She added some of the men shouted “dirty whores” and “kill them” as the pair stormed the stage.

The activists were both arrested at the scene and Miss Shevchenko thanked the police for protecting them before taking them into custody. Both were released after being questioned and an investigation has been opened.

Organisers of the conference said they would press charges against the protesters.

A petition had been launched prior to the event calling for it to be stopped, attracting 6,000 signatures. Shopping and cooking were held up as examples of appropriate “feminine activities” at the event and one speaker had posted on social media calling for women to veil their faces or risk hellfire and sexual assault in the afterlife.

Twitter users took to their accounts to call for the activists to be collectively raped or stoned. And the conference organisers urged Muslims to “stand together” and attend the final day of the event on Sunday, saying it was “the victim of an anti-Muslim media frenzy”.

So this conference run by the “religion of peace” spends time debating whether wives should be beaten and suggesting women stick to shopping and cooking. What is even more worrying is that a twitter response to the demonstration advocated the “raping and stoning” of these female demonstrators.

So tell me again that it is only the small minority of muslims who think like this. An ideology still locked into the 7th century and completely unable to come to terms with the 21st century and the fact that women have an equal place in society.

Moreover, someone should remind these islamic cretins that they are living in a country where, assaulting a woman (indeed, assaulting anyone) is AGAINST THE LAW and they should be prosecuted for advocating any such behaviour.

I have not noticed any of  of the “majority of muslims” (as it is always claimed that it is the small minority who behave like these cretins in France) standing up and saying “I may disagree with these women but they have the right to fight for what they believe in and we should respect that.”