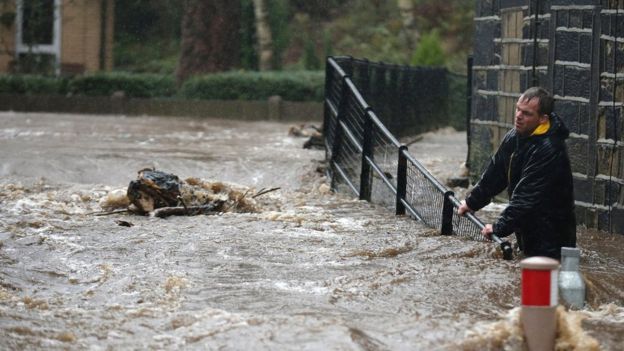 Anyone who has followed my blog will remember the one about the floods in West Yorkshire and which featured the above distressing image of the devastation of the floods. It was at Christmas time and for whole communities their priority was getting through the chaos caused by the floodwaters, seasonal festivities were the last thing on their minds.

Well, people in Hebden Bridge, Mytholmroyd and Cragg Vale are now celebrating “the Christmas that never was”, six months after flooding devastated the area. Thousands of homes and businesses in the region were damaged when Storm Eva battered the north of England during December’s floods. 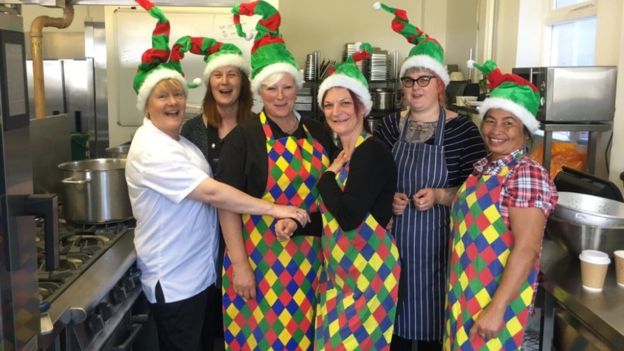 Organisers said it was an opportunity for the whole community to have a proper party.
The event features six snow machines and Christmas trees. There was also a surprise guest at the celebrations

There was also a Christmas lunch for volunteers who helped when the floods hit, with an unseasonal visit from Santa and a festive-themed market with live entertainment, including brass bands and choirs.

Organisers said: “It is our way of saying thank you to all the volunteers who helped on Boxing Day, and in the weeks that followed.” About 500 people attended  a Christmas lunch event at Riverside School in Hebden Bridge.

During the December floods, a bus was swept down the street and sandbags were ripped up due to the force of the water running through the town.

So well done to the people of those devastated areas for showing their gratitude to all those who helped out and demonstrated the true meaning of community spirit.