Fog comes to the Colne Valley

Yesterday I drove the thirty five miles to Manchester with the specific aim of getting my Pentax camera repaired. It was only on arriving in the city and parking up I realised I had put the wrong camera in my bag, namely my Nikon D5200 (I think it must be my age!).

As it was a beautiful day I decided to make the most of it and went for a walk around the city centre. First up was the unprepossessing Manchester Cathedral, I have to ask the question “does any other major city in Europe have such a nondescript building masquerading as a cathedral?”

I then walked along the side of the River Irwell which is now lined with posh apartment buildings, some new and some converted from old warehouses, and to be fait this has brought inner city living back to Manchester. I can remember back in the late 60s and 70s that the centre of Manchester was not the most inviting place to be after dark as everyone had moved out to the suburbs (these are what is known in Lithuania  as “sleeping districts”). 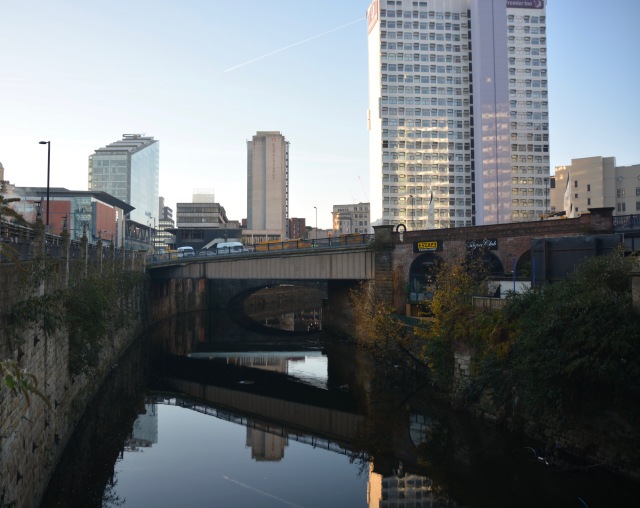 Eventually I arrived in the city centre and in particular Albert Square, which is currently the residence of the “Christmas market” There is stall after stall selling a lot of “tat” (and over priced tat), food stalls and numerous stands where both coffee and alcohol could be obtained. The number of stall seems to have grown like topsy in recent years and this year there seemed to be even more lining squares, main streets and even some back streets…….is there no end to our desire to consume Christmas goods?

I saw people buying so-called “bargains” at meat stalls, cheese stalls and wine / beer stalls, much of which would get thrown away eventually. Moreover, if people are daft enough to pay £4.00 for a bottle beer, then I have no sympathy for them. Eventually I tired of wandering around the city and decided to walk back to the car park, pick up my car and make my way home.

My drive home was uneventful but when I got back to Huddersfield there was a massive bank of fog sitting in the Colne valley so I drove up to the highest point above Golcar, a place called Scapegoat Hill.  Scapegoat Hill is a small village 5 miles (8 km) west of Huddersfield, West Yorkshire, England. It is near to the villages of Slaithwaite and Golcar. The village together with nearby Bolster Moor has a population of 1,246. 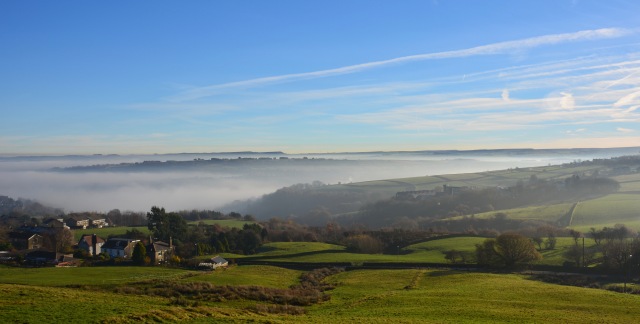 The first recorded mention is from 1638 in the records of Huddersfield Parish Church on the death of a child of a William Aneley. At that date, the place was called ‘Slipcoat’ (or Slippery Coat) Hill. The first record of the name ‘Scapegoat Hill’ occurs in an Enclosure notice placed in the Leeds Mercury in 1820. Although the first Ordnance Survey map (of 1843) uses the old name, ‘Scapegoat Hill’ was in regular use after 1820.

The village grew up around the woollen trade, and, in spite of having no mill, continued to grow in size throughout the nineteenth century. In fact, handloom weavers are recorded here as late as 1935. Throughout the nineteenth century and well into the twentieth, the village was a very strong centre of baptism, opening a church as a daughter of the Pole Moor Church 1871 and moving to its present building in 1900.

The view from Scapegoat Hill across the valley was visually stunning with the village of Golcar sitting above the fog bank and in the distance could be seen Tower Hill and Emley TV transmitter. I managed to get some reasonable shots as the fog slowly moved along the valley but a couple who I met on the hill said I had missed the best shots by about ten minutes.

Anyway, I am satisfied with those I did manage to take and it is on beautiful days like this that we who live out in the wilds of West Yorkshire fully appreciate the beauty of the landscape and how lucky we are to have it on our doorstep.