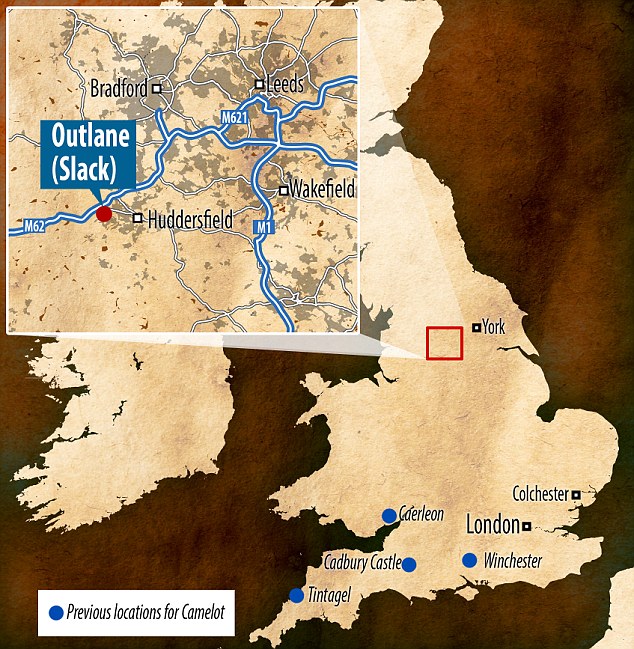 King Arthur’s legendary home and the site where he planned his war against Saxon invaders may finally have been uncovered – in Yorkshire. The legend of King Arthur and Camelot has been the subject of countless books and films but the court location has baffled academics for more than 1,000 years.

However, a retired Bangor University professor believes he has finally found the elusive site. The site of ruined Roman fort Slack in Outlane, which is on the road linking Chester and York, would have been the ideal location for King Arthur and his court, according to retired Bangor university profesor Peter Field

Peter Field believes Camelot was in fact in Yorkshire, reports The Times. He told the paper he was looking at maps during a lecture on the Roman occupation of Britain when he spotted the name ‘Camulodunum’, meaning ‘the fort of the God Camul’.  The name would easily have been shortened to Camelot.  He said: ‘Suddenly all the ducks lined up. I believe I may have solved a 1,400-year-old mystery.

The location of the famous court where King Arthur planned to defend the Kingdom against Saxon invaders has never been discovered – until now ‘I looked at the arrangement of places and thought good heavens, this Camulodunum is on the road to York — and York’s the place the Britons had tried to control if they were to stop the Anglo-Saxon invasion.’

Professor Field believes that the key to the entire mystery could be lying just outside Huddersfield (by the side of the M62 motorway). The site of the ruined Roman fort Slack in Outlane, which is on the road linking Chester and York, would have been the ideal location for King Arthur and his court, according to the professor.

There were two Camulodunums in Roman Britain: one in Colchester, Essex and the other in Slack. Professor Field discredited the Essex site because it was behind enemy lines during the time Camelot is thought to have existed.

He deduced that the gathering point for King Arthur’s soldiers would have been in Chester, and the strategic city they needed to protect was York.  The fort in Outlane is on the road to both sites.

Author Simon Keegan backs up Professor Field’s theory in his book Pennine Dragon, which explores the legend.  The book states: ‘Arthur Pendragon was actually a ruler recorded in history as Arthwys of the Pennines.  ‘He and his father ruled from the old Roman garrisons of Hadrian’s Wall and the City of York and his base was Camulod (Camelot) in the heart of what is now Yorkshire.’

I suspect there will be outrage and steam emanating from ears in the Duchy of Cornwall, as they have always claimed that Camelot was at Tintagel in the county of Corwall and a whole tourist industry has been built on promoting the legend of the mythical King Arthur and his Knights of the Round Table.

One of the country’s leading academics in Arthurian literature has thrown his weight behind claims that the legendary king’s court of Camelot was on the outskirts of Huddersfield.

In a lecture at Bangor University Professor Peter Field appeared to solve a mystery dating back almost 1,500 years when he located King Arthur’s mythic base at the old village of Slack, near Outlane, in a parcel of land close to the M62 motorway.

Emeritus Professor Field, now 77 and retired, is a 50-year specialist in Arthurian literature and taught at Bangor from 1964 to 2004. In his lecture Searching for Camelot he shattered centuries of debate about Arthur’s links to the south west and instead said the ‘once and future king’ was rooted in the north.

More specifically, in Yorkshire. “Slack was once known as Camulodunum, the fortress of Camul, who was a Celtic war god. It’s on the Roman road from one of the great military bases in Chester to a second one in York,” said Professor Field. “The more I think of this at Slack, the more advantages I think it has got. It really seems to be the right place. It just stands out.

“I think I have probably found Camelot. There is no certainty. The evidence is not thick enough on the ground for anybody to be certain of anything. You have to go on what you know.

“It does not mean Arthur was born there or buried there but it means the people who told the stories saw that it was his place.”

Mr Keegan, the author of both Pennine Dragon: The Real King Arthur of the North, and The Lost Book of King Arthur, says Professor Field’s research has proved his hypothesis.

“1,500 years ago, the location now centred on Outlane golf course was a Roman fort called Camulod[onum], which I argued was the most likely location for Camelot,” says Mr Keegan. “Not just because of its name and location (on a road joining major Roman cities) but because the earliest references to Arthur seem to suggest he ruled in the area that now covers the Pennines.”

Research by Huddersfield and District Archaeological Society insisted there was an active military and civilian settlement at Slack for almost 400 years.

This entry was posted in 21st century, Golcar, History, Uncategorized and tagged Camelot, In Yorkshire, King Arthur, near M62, Outlane. Bookmark the permalink.

3 Responses to King Arthur of Huddersfield………..