South Africa on its way to becoming another Zimbabwe……..country riddled with corruption 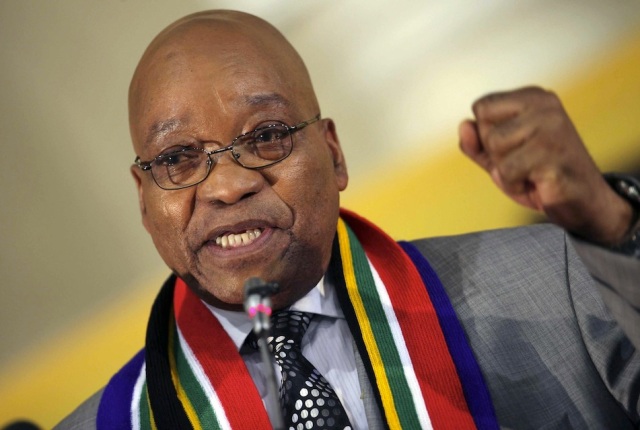 Last week South Africa finally got around to sacking its high commissioner to Singapore, more than four months after a newspaper exposed her criminal past. Until that point officials had managed not to notice that the high commissioner was a drug trafficker who had served a two-year sentence in an American jail for smuggling cocaine while working as an air hostess.

It had not been the diplomat’s first smuggling arrest. Four years earlier she had gone on trial in South Africa for importing nine kilos of heroin in her suitcase; after the witnesses mysteriously declined to testify, her trial collapsed. Hazel Ngubeni had omitted to declare her conviction to the authorities, and months of security vetting had apparently been unable to uncover these basic facts.

Ngubeni is not the only diplomat to have benefited from lax standards. The high commissioner to Britain had, it turned out, failed his vetting. He had too many large unexplained cash sums deposited in his bank accounts. His bosses decided to overlook the evidence, keep the security findings secret and post him to London anyway. Where he remains today.

Neither of these stories caused more than a ripple in the news. They are competing with so many daily accounts of lies and corruption that they cannot make an impact. The ANC under President Zuma is running a country where official thieving, from the government and police chiefs downwards, is commonplace and rarely punished.

There is the newly appointed primary school headmistress who is in hiding after receiving death threats. Her predecessor, who had received the same threats scrawled on her blackboard, was found hacked to death. The heads are from one of the areas hit by a jobs-for-cash scandal, where teachers have been bullied into paying thousands of pounds to officials, unions and governing bodies in return for promotions and appointments. The assumption is that these teachers either didn’t pay at all or didn’t pay enough.
There is chaos in Johannesburg, where the opposition Democratic Alliance won control from the ANC last summer, for the first time in 22 years, on a promise to bring integrity and order to a council infamous for kickbacks and inefficiency. The mayor has been so overwhelmed by the scale of corruption that he has had to set up an independent forensic unit.

Hundreds of officials have been suspended on full pay, accused of cheating the city by selling properties for much less than they were worth, creating fake bills or taking bribes, and the mayor says wearily that this is just the tip of the iceberg. The council is pursuing the cases because the national prosecuting authority seems totally uninterested. The city needs billions spent on infrastructure, money it doesn’t have because so much has been diverted into private pockets.

This rotting of the state is exemplified by the man at the top. Zuma has spent millions of public money on his house. Much more importantly he and his cabal are embroiled in a close relationship with a powerful family, the Guptas, who have made many millions from state contracts, have been accused of money laundering and kickbacks, and have so much influence over the government that they have allegedly offered cabinet positions and huge bribes to ministers in return for doing as they are told. Zuma and the Guptas are known to be trying to sack the finance minister, a highly principled man who is fighting to stop the treasury being ransacked.

Such institutionalised corruption has led the ANC into its greatest crisis since the end of white minority rule in 1994. It had been complacently confident that it would always be the party of the people, but last year, in a shocking turnaround, almost half the electorate voted against it, cutting its vote from 62 per cent in 2014 to less than 54 per cent. The party now controls none of the four big urban areas, and if this slide continues it will lose the presidential election in 2019.

This prospect is splitting an organisation that always believed in public unity. Zuma’s brazen response to unpopularity has been not to reform but to double down on entrenching his faction. He knows that if anyone other than an ally succeeds him he will be prosecuted and may be jailed. He already has 783 fraud and corruption charges hanging over him, suspended by the courts. More would follow. All his efforts are now directed at eliminating rivals and getting his former wife selected as the next ANC leader and future president at the party convention at the end of this year.

A section of the party is at last fighting back, in sheer panic about its future, with some provincial leaders and cabinet members openly attacking the abuses. Zuma’s greatest threat is the deputy president, Cyril Ramaphosa, a man who was once a charismatic union leader and became a rand billionaire in business. Ramaphosa, who claims to oppose corruption, now openly opposes Zuma, calling for the ANC to conduct “lifestyle audits” on its leaders to uncover those living on mysterious means.

The power struggle over the next year will determine South Africa’s future. If Zuma and his allies retain power and undermine the last institutional defences against corruption, the country will be on the road to becoming another Zimbabwe by 2019. If Ramaphosa can persuade the party to back him, he might just pull both state and party out of decline. The nation is in desperate need of it, with poverty and inequality entrenched, zero growth last year and unemployment at more than 26 per cent. Fight, the beloved country.

Article by Jenni Russell in The Times Newspaper